By Zachary Neel March 1, 2022 7:25 am
By Zachary Neel | March 1, 2022 7:25 am PT
We are finally into the month of March, and while that means an uptick in interest for college basketball, it also brings with it the start of spring football for the Oregon Ducks.
This spring will bring more weight than we’ve seen in the past, with the arrival of new head coach Dan Lanning and his coaching staff in Eugene, looking to take over what Mario Cristobal left behind and build a power in the Pacific Northwest.
While we continue our spring preview ahead of the action getting started on the field, we wanted to look several months into the future and try to figure out which players fans will be fawning after with newfound love during the 2022 season. They could be second-year players who showed promise in the past and are now stepping into a bigger role, or simply guys who have found a rhythm now that they have a year of experience under their belts.
In any case, here are our candidates for the 11 Oregon players who are poised for a breakout second season with the Ducks: 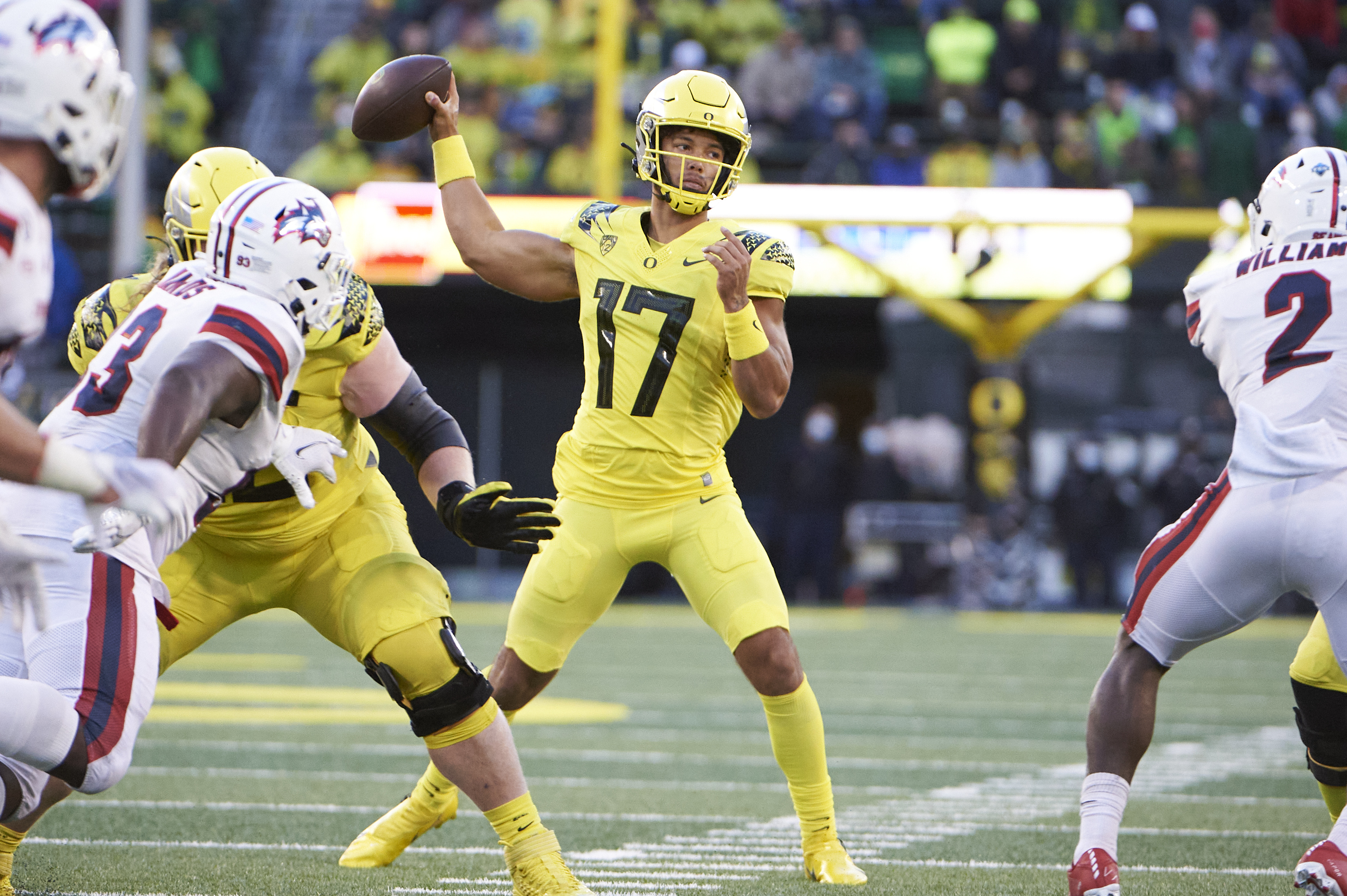 Troy Wayrynen-USA TODAY Sports
2021 Stats: 3 games // 15 attempts // 7 completions // 87 yards // 2 TD // 1 INT
There’s a real possibility that we don’t see Ty Thompson play at all in 2022. There’s also a chance that he beats out Bo Nix for the starting QB job and becomes the next great Oregon quarterback. Until we know more about the QB competition, it’s impossible to say, but there’s a feeling in Eugene that Thompson has a lot of promise and just needs the opportunity to show what he can do. 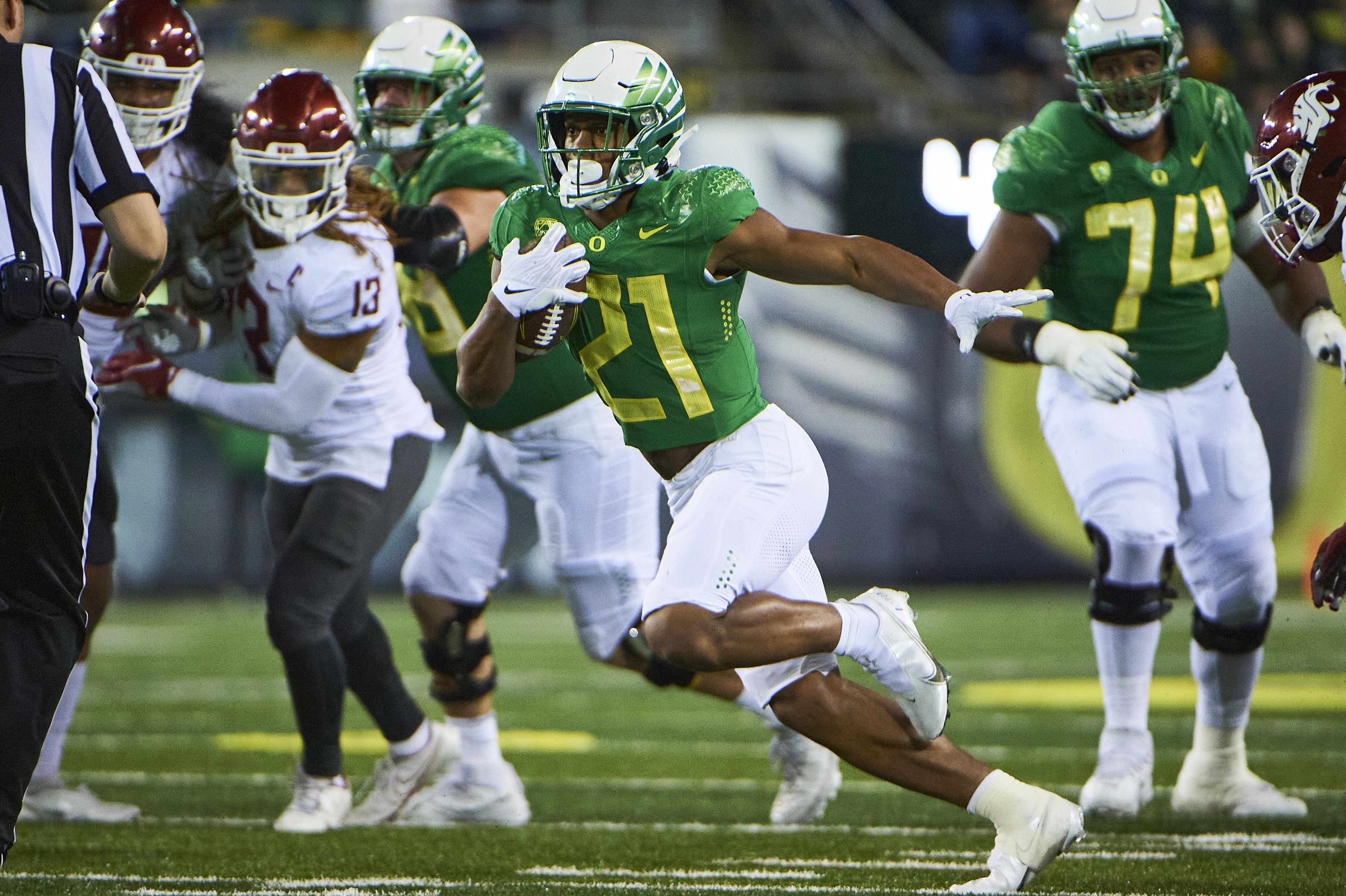 Troy Wayrynen-USA TODAY Sports
2021 Stats: 10 games // 61 attempts // 417 yards // 3 TD
Byron Cardwell showed just how impactful he could be as a true freshman, stepping up in the wake of CJ Verdell’s injury and helping the Ducks keep up steady production in the backfield. As the perceived lead RB now, the ceiling for Cardwell is incredibly high. 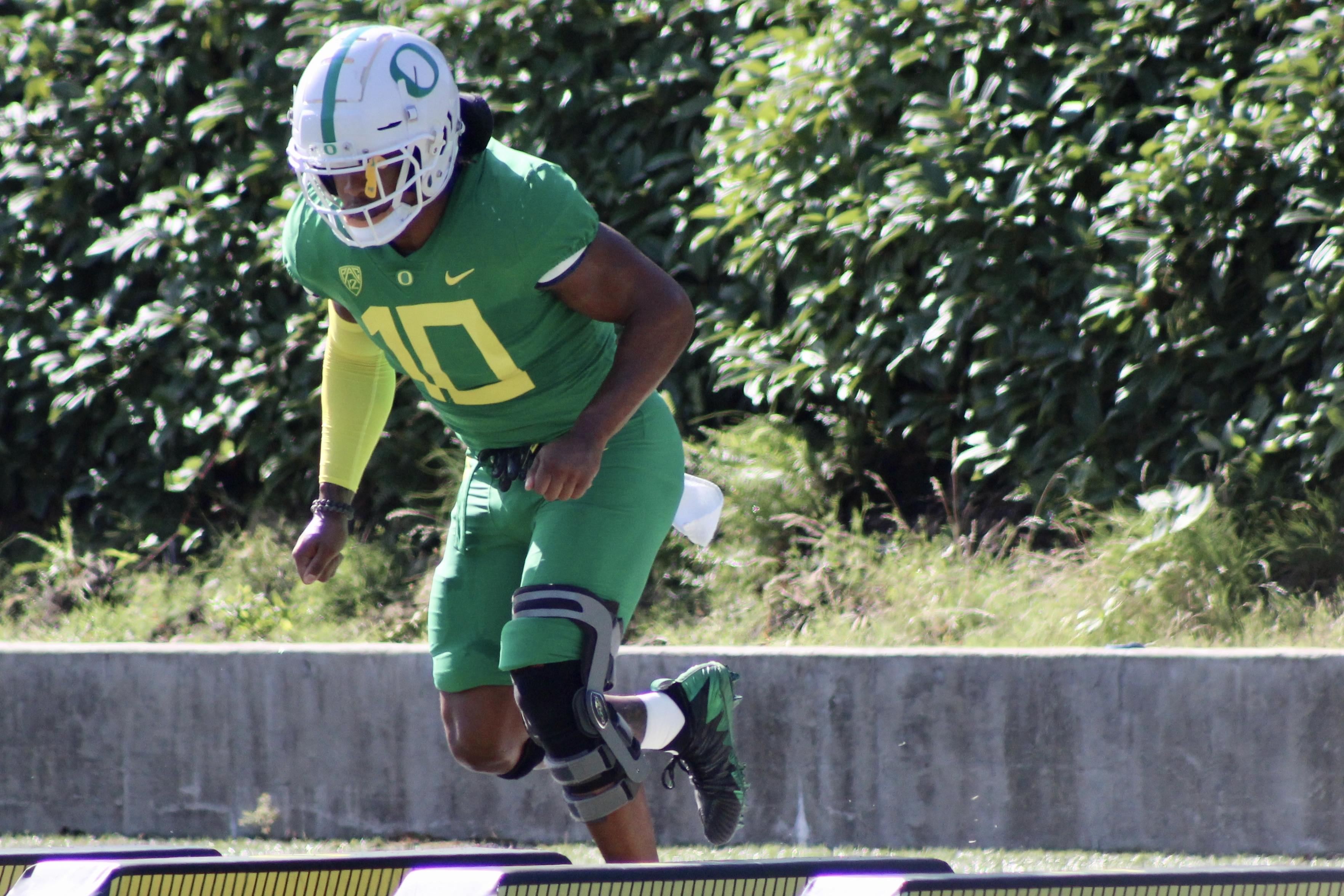 (Photo by Zachary Neel | USA TODAY Sports)
2021 Stats: 1 game // 14 tackles // 1 forced fumble
2020 Stats: 1 game // 1 tackle
Yes, technically Justin Flowe is entering his third season as a Duck, but we included him on this list because of the minuscule number of games he’s played in due to injury. We caught a glimpse at how special Flowe could be in the 2021 season opener against Fresno State, where he racked up a game-high 14 tackles and a forced fumble. Should he be able to stay healthy this season, the duo of him and Noah Sewell could be among the most dominant in the nation, especially with Dan Lanning leading them. 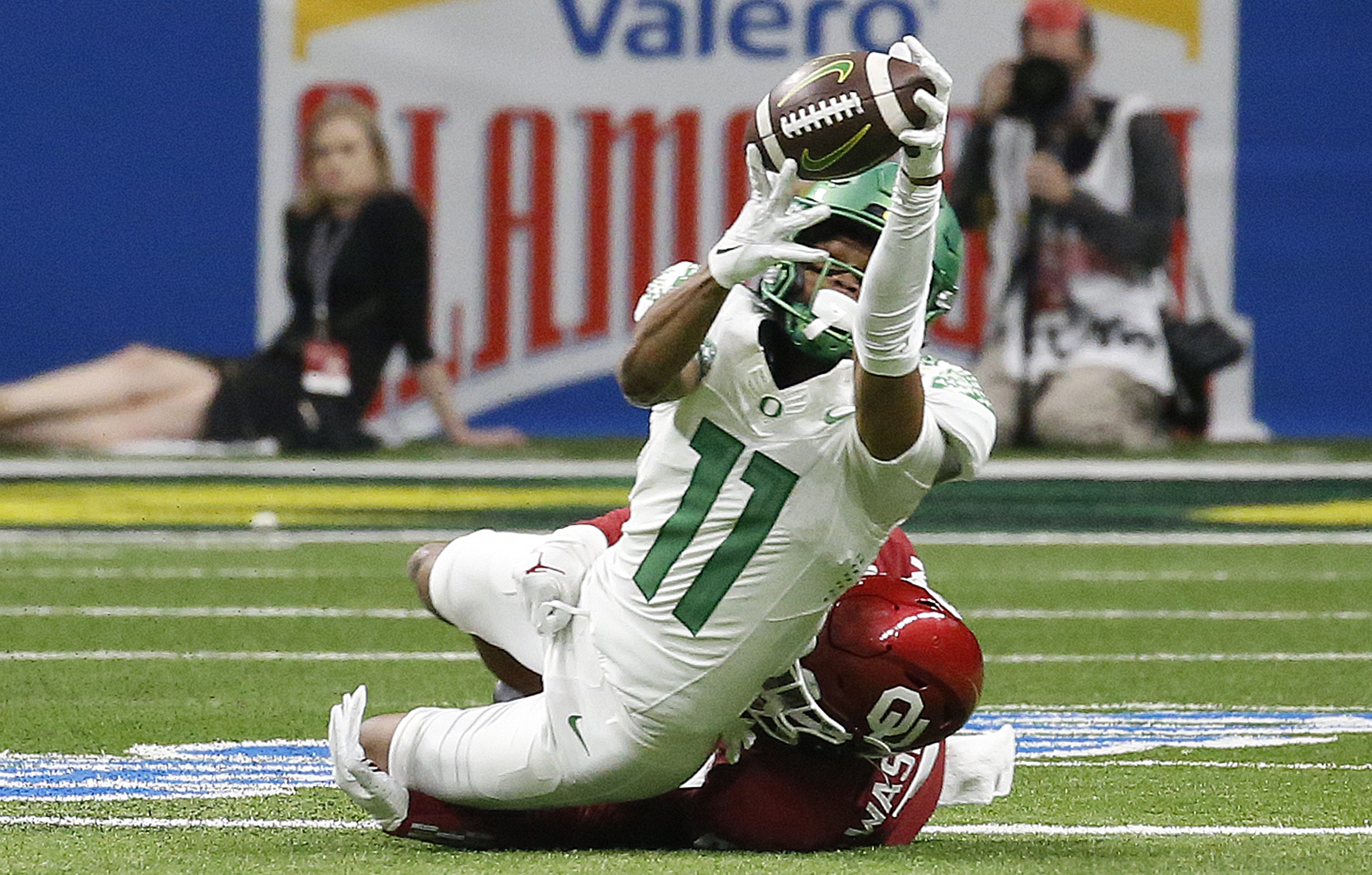 (Photo by Ronald Cortes/Getty Images)
2021 Stats: 10 games // 18 catches // 209 yards // 2 TD
The Ducks will be looking for new leading receivers in 2022, and after the finish to his true freshmen season, Troy Franklin is definitely a leading candidate. Franklin had 65 yards and a TD in the Alamo Bowl and is part of the trio alongside Kris Hutson and Dont’e Thornton who will likely lead Oregon in Kenny Dillingham’s new-look offense. 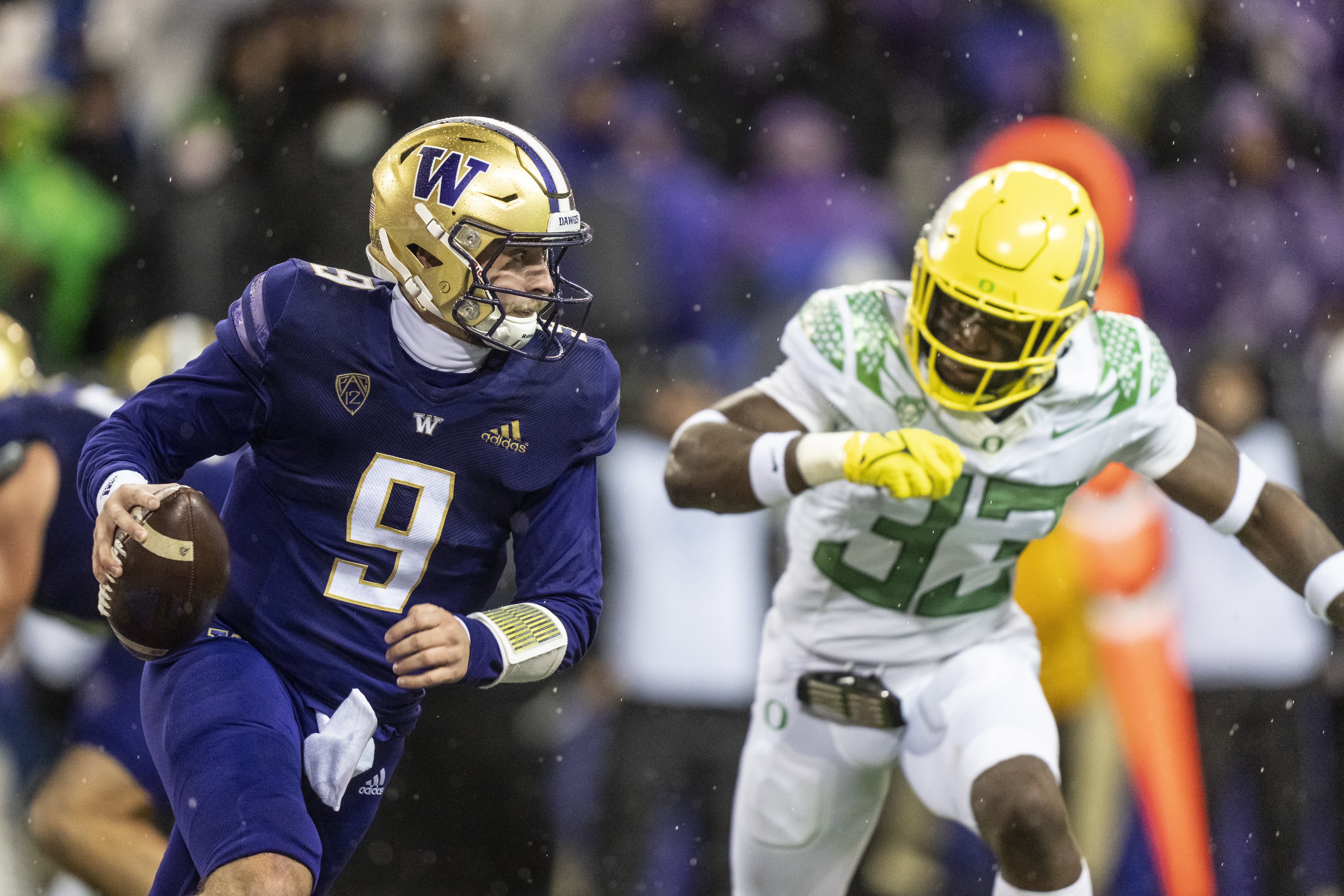 (AP Photo/Stephen Brashear)
2021 Stats: 11 games // 48 tackles // 1 sack // 1 pass defended
Watching where Jeffrey Bassa lines up on the defense in 2022 is going to be very intriguing, especially under a new coaching staff. Last year, Bassa moved to the linebacker position due to a need for healthy bodies, but he is more used to a safety role and could potentially move back into the secondary. What many people are wondering is where Lanning is going to fit Bassa, with a hope that he can turn into a Jamal Adams/Landon Collins strong safety thumper. 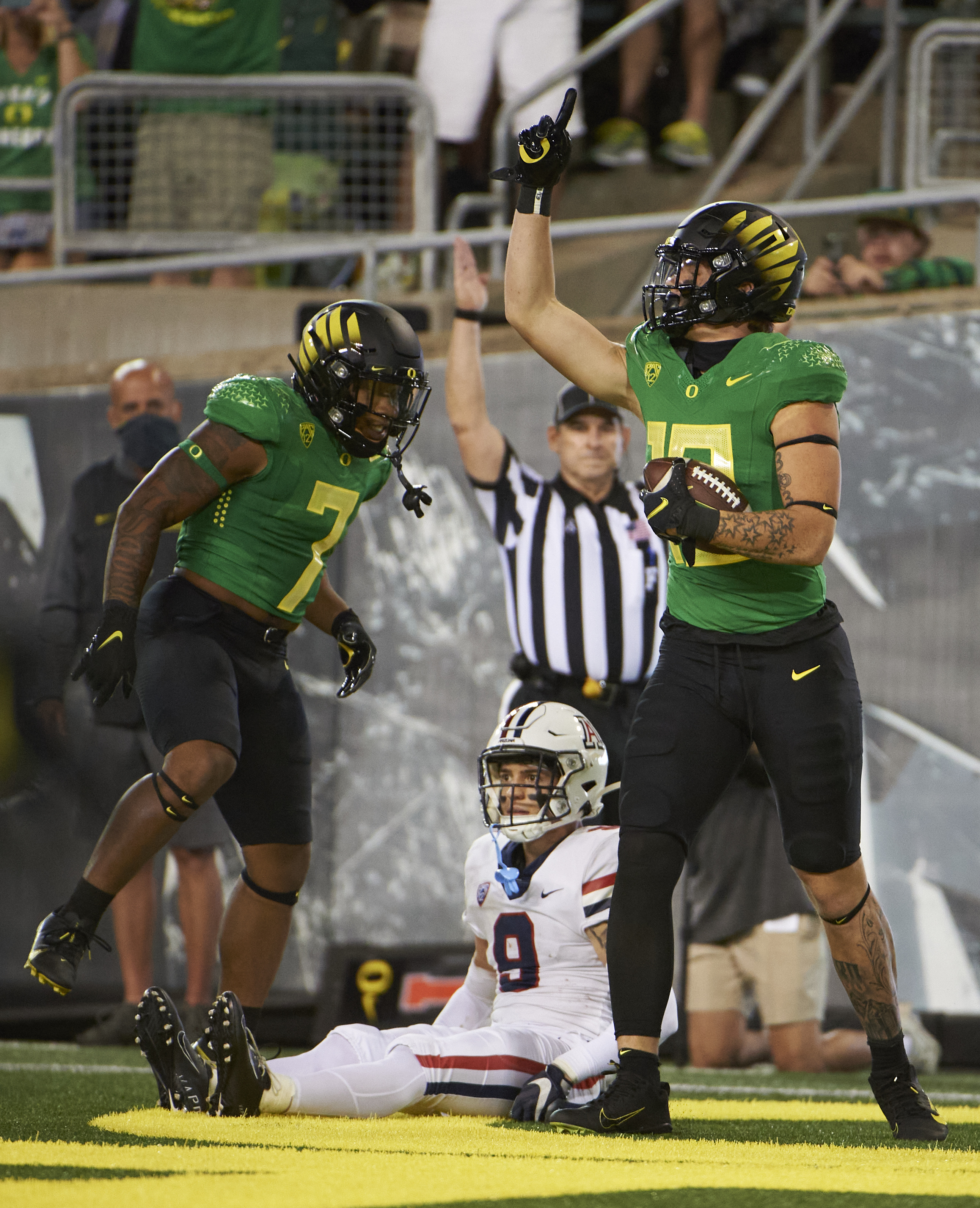 Troy Wayrynen-USA TODAY Sports
2021 Stats: 12 games // 17 catches // 141 yards // 2 TD
We don’t quite know how Kenny Dillingham is going to utilize tight ends in his offense, but after an impressive freshman season, Terrance Ferguson seems to be in a good position to gain a bigger role in the offense and step up as a real receiving threat. 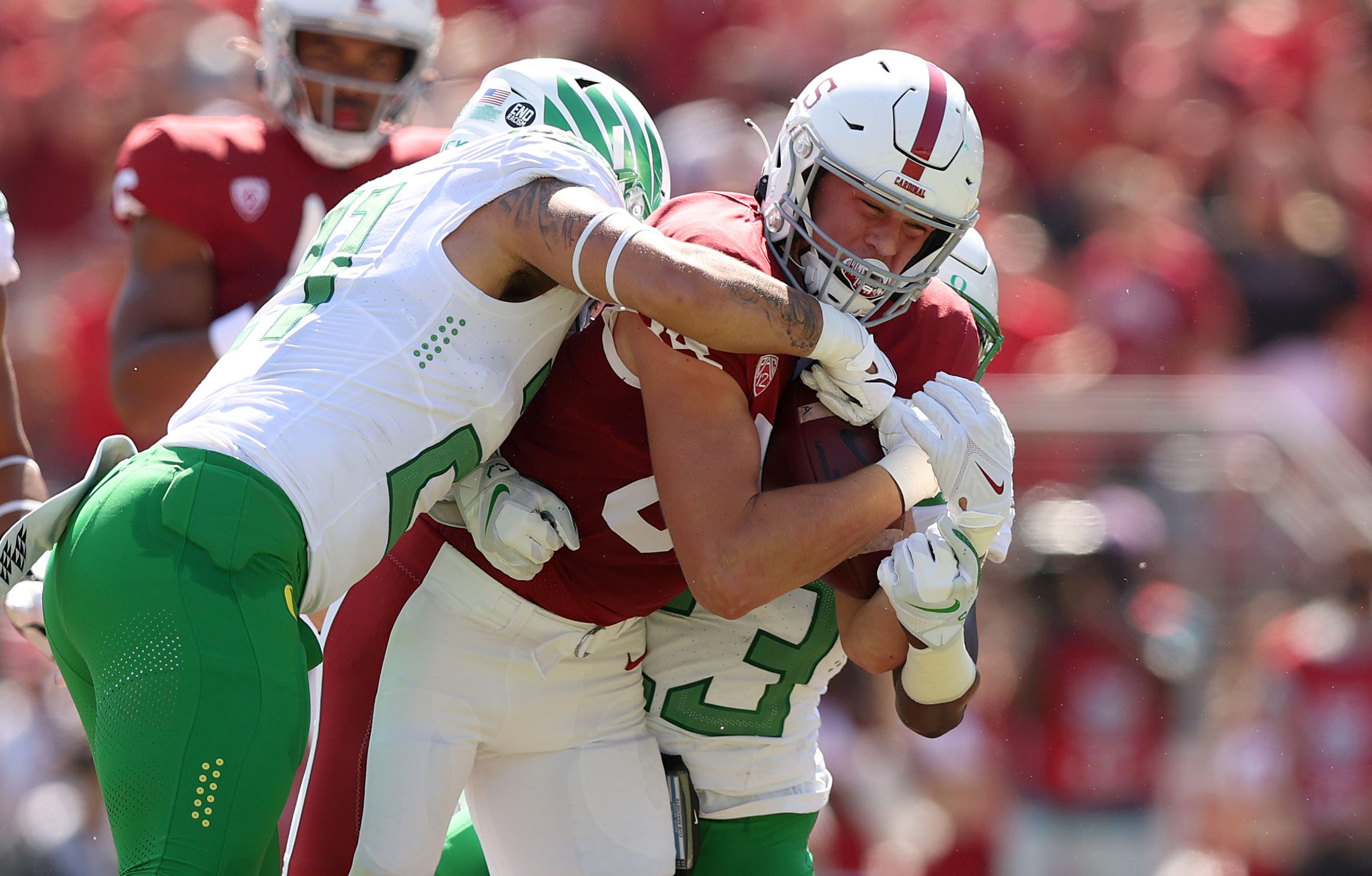 (Photo by Ezra Shaw/Getty Images)
2021 Stats: 7 games // 15 tackles
Forced to play because of a severe lack of healthy linebackers, Keith Brown probably got thrown into the fire a bit earlier than expected but got some great experience in the meantime. Brown was a highly-rated recruit coming out of Portland, and he has a chance to continue his rise with more playing time this coming season. 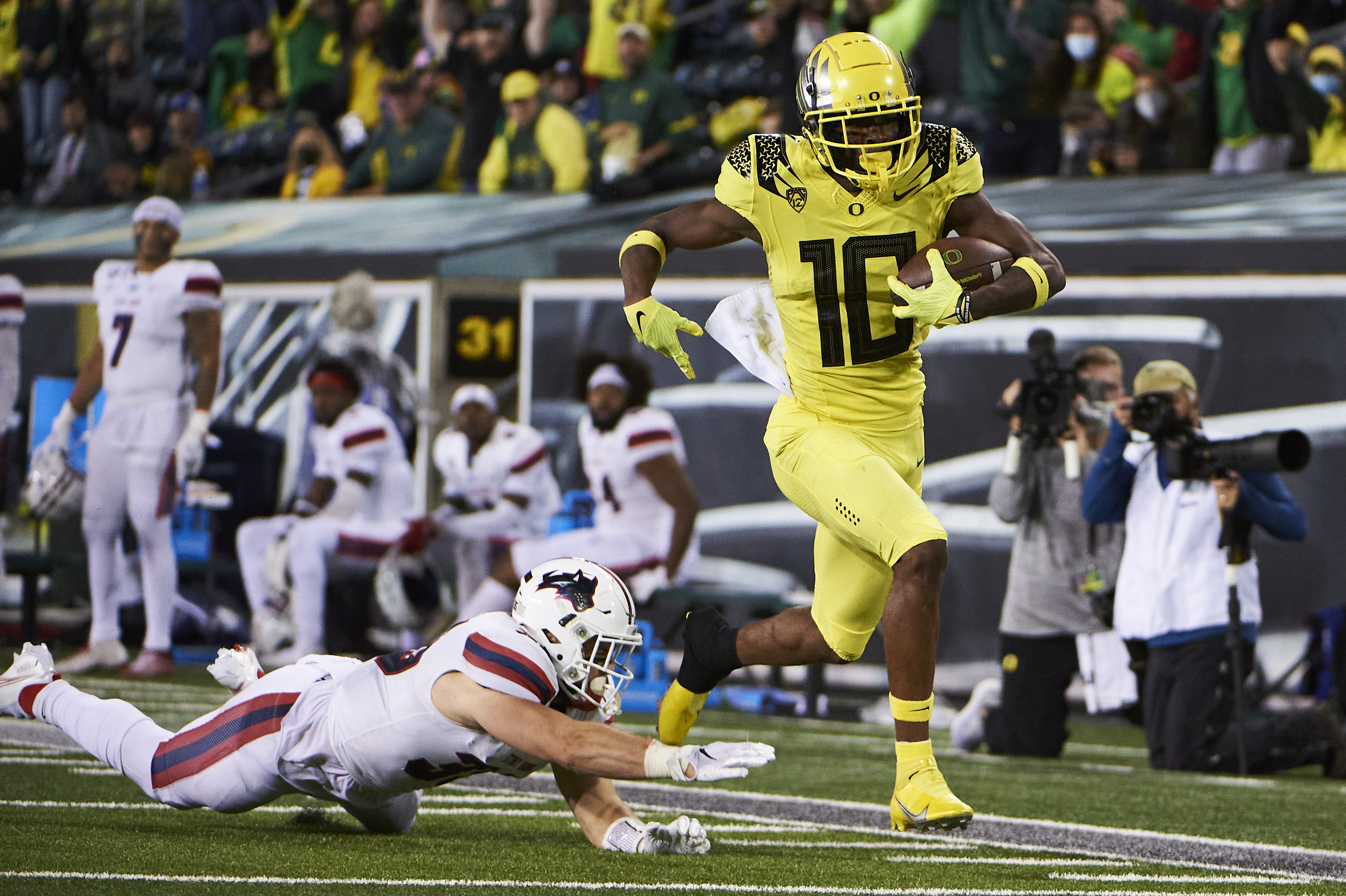 Joshua L. Jones/Athens Banner-Herald via USA TODAY NETWORK
2021 Stats: 4 games // 9 catches // 175 yards // 2 TD
Much like Troy Franklin, Dont’e Thornton showed promises in his freshman season with the Ducks and is in a prime spot to step into a bigger role in the offense with guys like Johnny Johnson, Jaylon Redd, Devon Williams, and Mycah Pittman now gone. 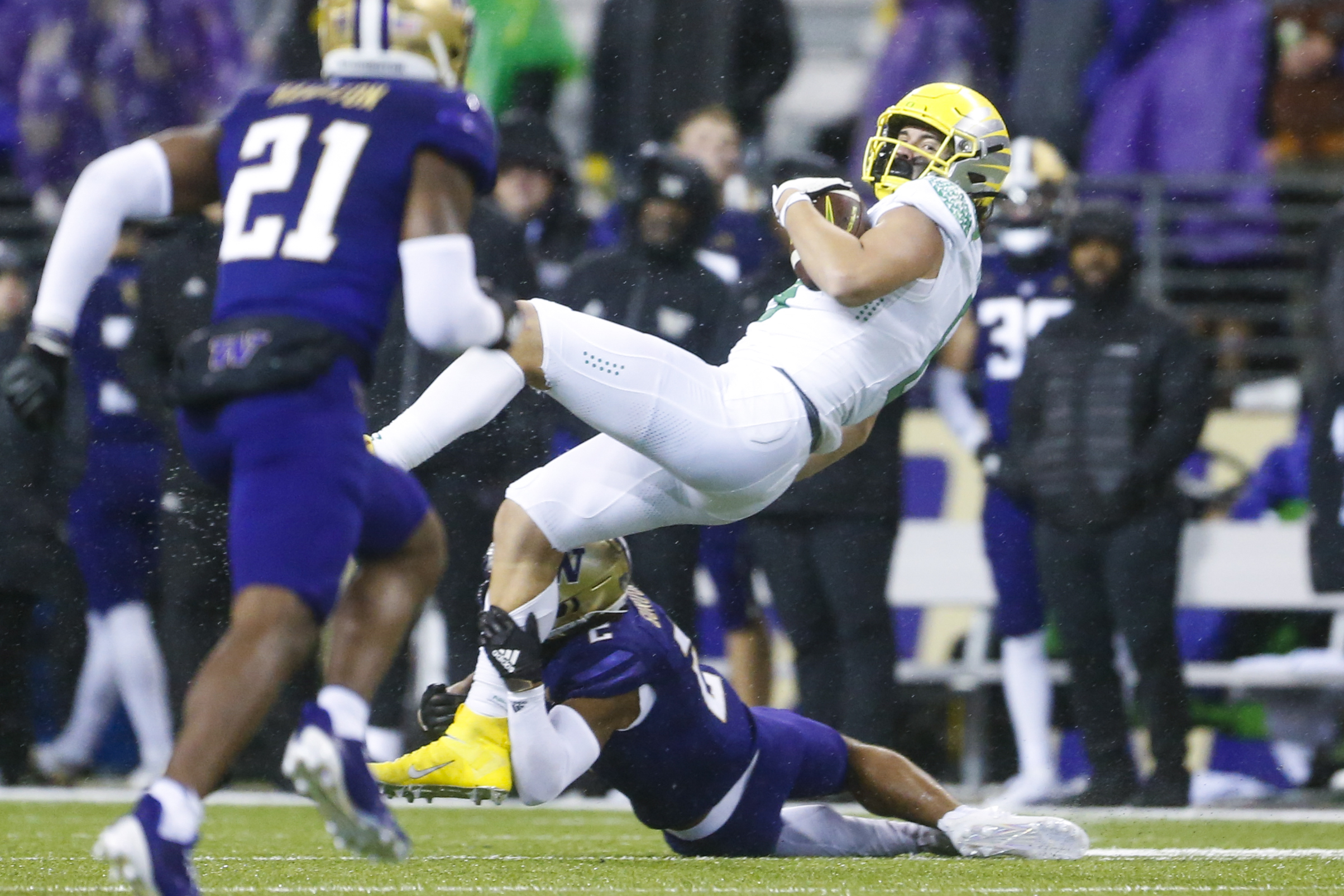 Joe Nicholson-USA TODAY Sports
2021 Stats: 9 games // 9 catches // 75 yards // 1 TD
Moliki Matavao had a solid freshman season, but because of how little tight ends were used in the Mario Cristobal/Joe Moorhead offense, we didn’t really get to see how much he can add to the passing game. Based on production, we may be leaning towards Terrance Ferguson as the TE1 in 2022, but Matavao certainly has a chance to step into a bigger role. 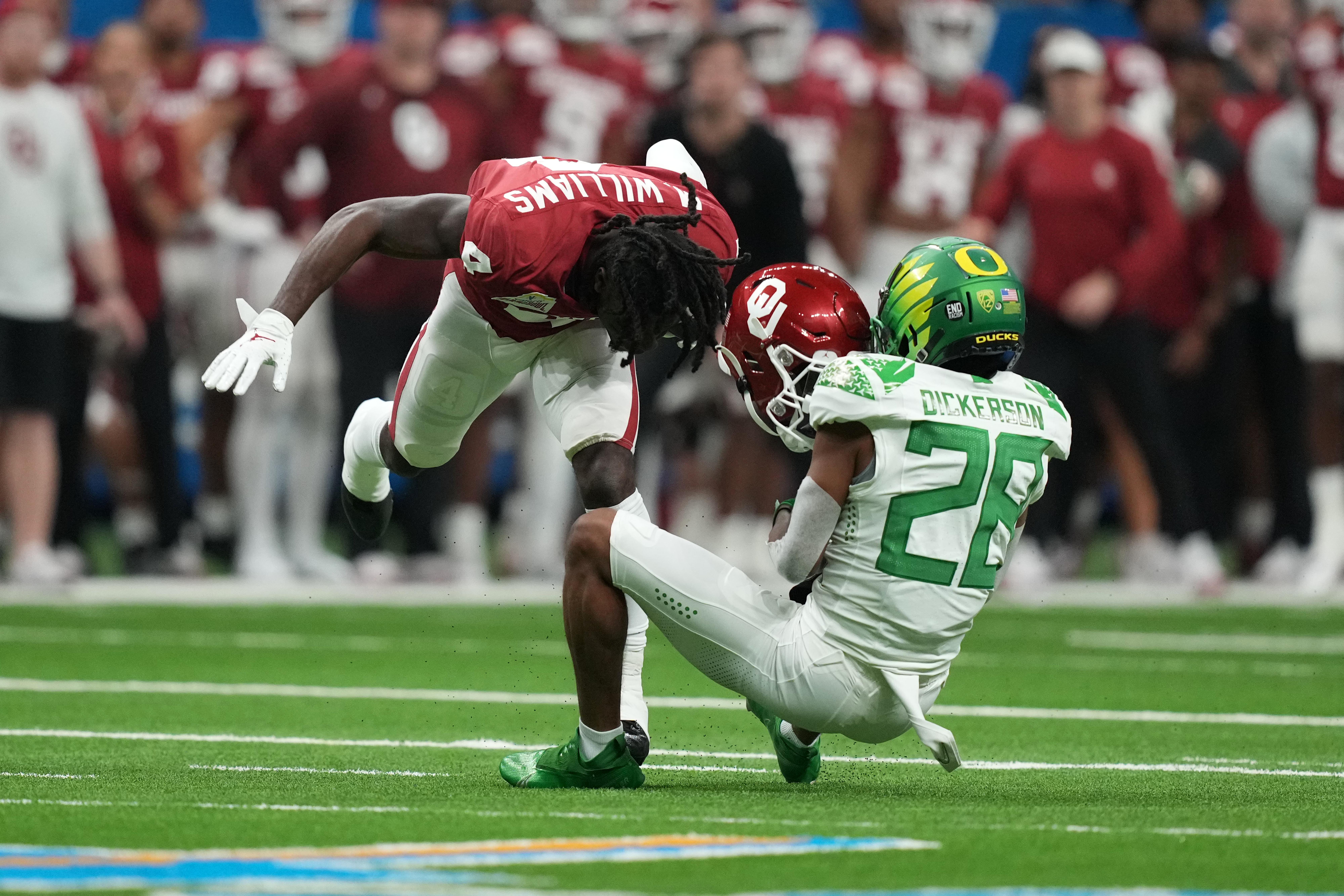 Kirby Lee-USA TODAY Sports
2021 Stats: 3 games // 4 tackles
We didn’t see much of Avante Dickerson in his freshman season, but due to the loss of depth at the cornerback position this offseason — Mykael Wright left for the NFL, and DJ James transferred to Auburn — the door is open for Dickerson to step into a bigger role on the field. As a former high-end 4-star recruit, there’s some hope that Dickerson will eventually become a solid piece of the Oregon defense. 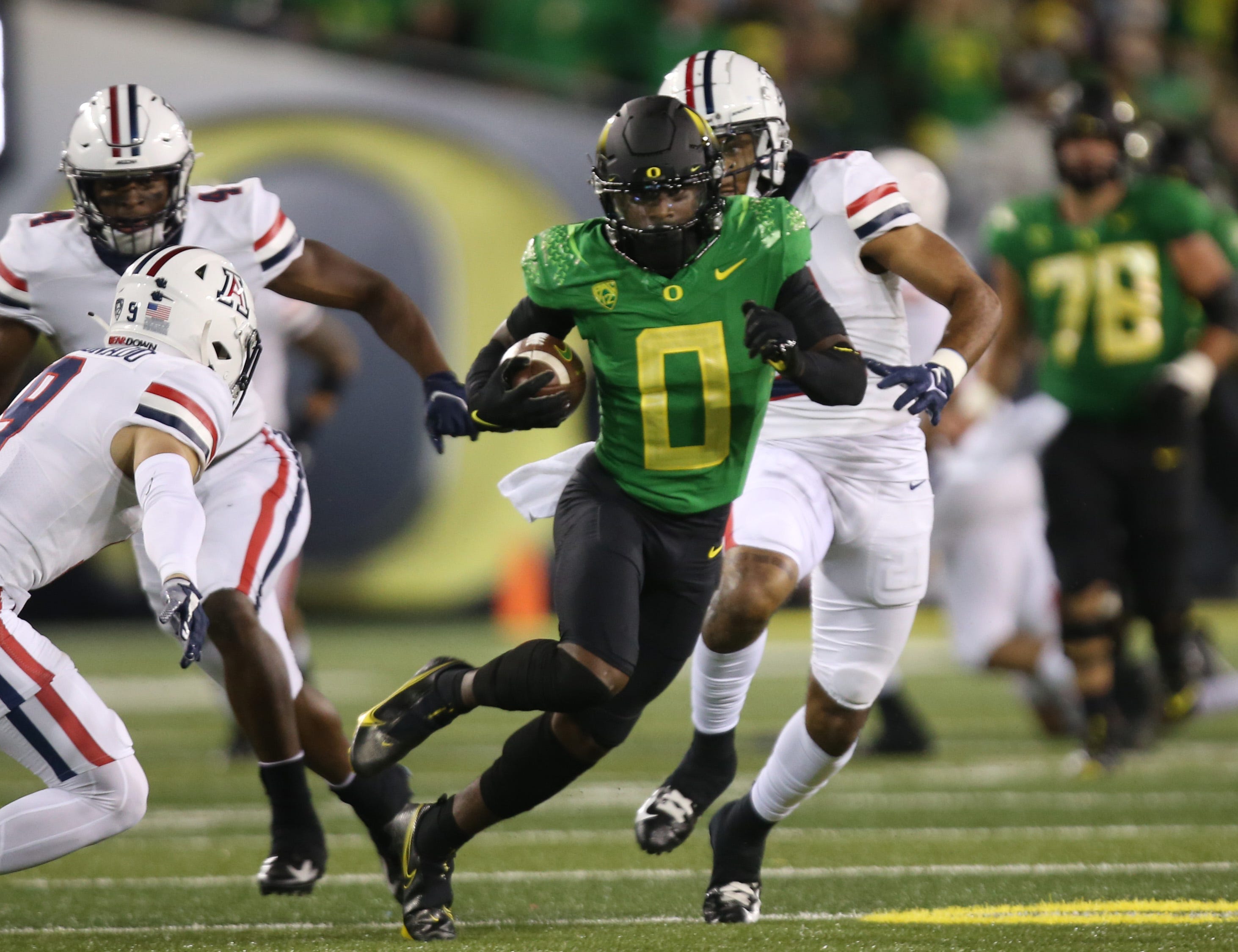 This site is not endorsed by, sponsored by, or affiliated with Oregon University.
Powered by WordPress VIP