By Josh Keatley February 28, 2022 1:29 pm
By Josh Keatley | February 28, 2022 1:29 pm ET
The Ohio State football team should be ready to rock and roll in 2022. Despite losing Garrett Wilson, Master Teague, and Chris Olave, C.J. Stroud and OSU are returning with more than enough play-makers to distribute and move the ball at more than an efficient rate.
The 2021 season was more or less a disappointment (at least for Buckeye standards), but the 2022 Ohio State team should be primed to make a legitimate national championship run. Now spring football hasn’t even begun, but I — like everyone else — like to make bold predictions and wild speculations. The following are five Ohio State players that I expect to make a bigger impact during the 2022 season.
Some of these selections are going to be insanely obvious, but I would be a fool to leave them off. With that said, some of these players may raise an eyebrow, which I welcome. 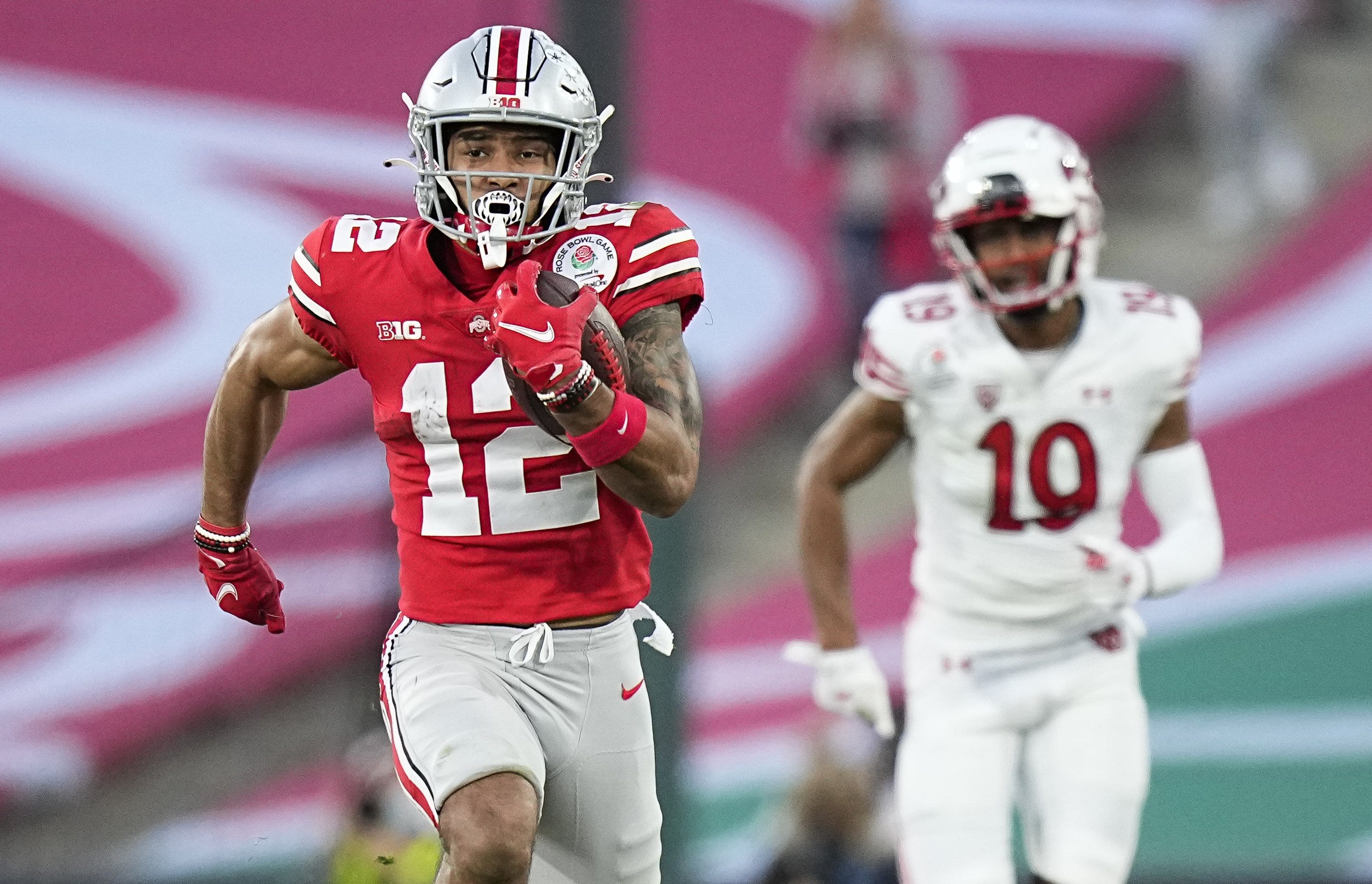 Ohio State Buckeyes wide receiver Emeka Egbuka (12) returns a kickoff ahead of Utah Utes wide receiver Bryson Reeves (19) during the third quarter of the Rose Bowl in Pasadena, Calif. on Jan. 1, 2022. Credit: USA TODAY Sports Network
Place this selection under the obvious side, as Emeka Egbuka was the second highest-rated recruit in Ohio State’s 2021 recruiting class and also the No. 1 receiver in the class. He already showed flashes of his elite ability last season. To be fully transparent, I expected Egbuka to see the field more than last season and hopefully, you will see why in 2022. 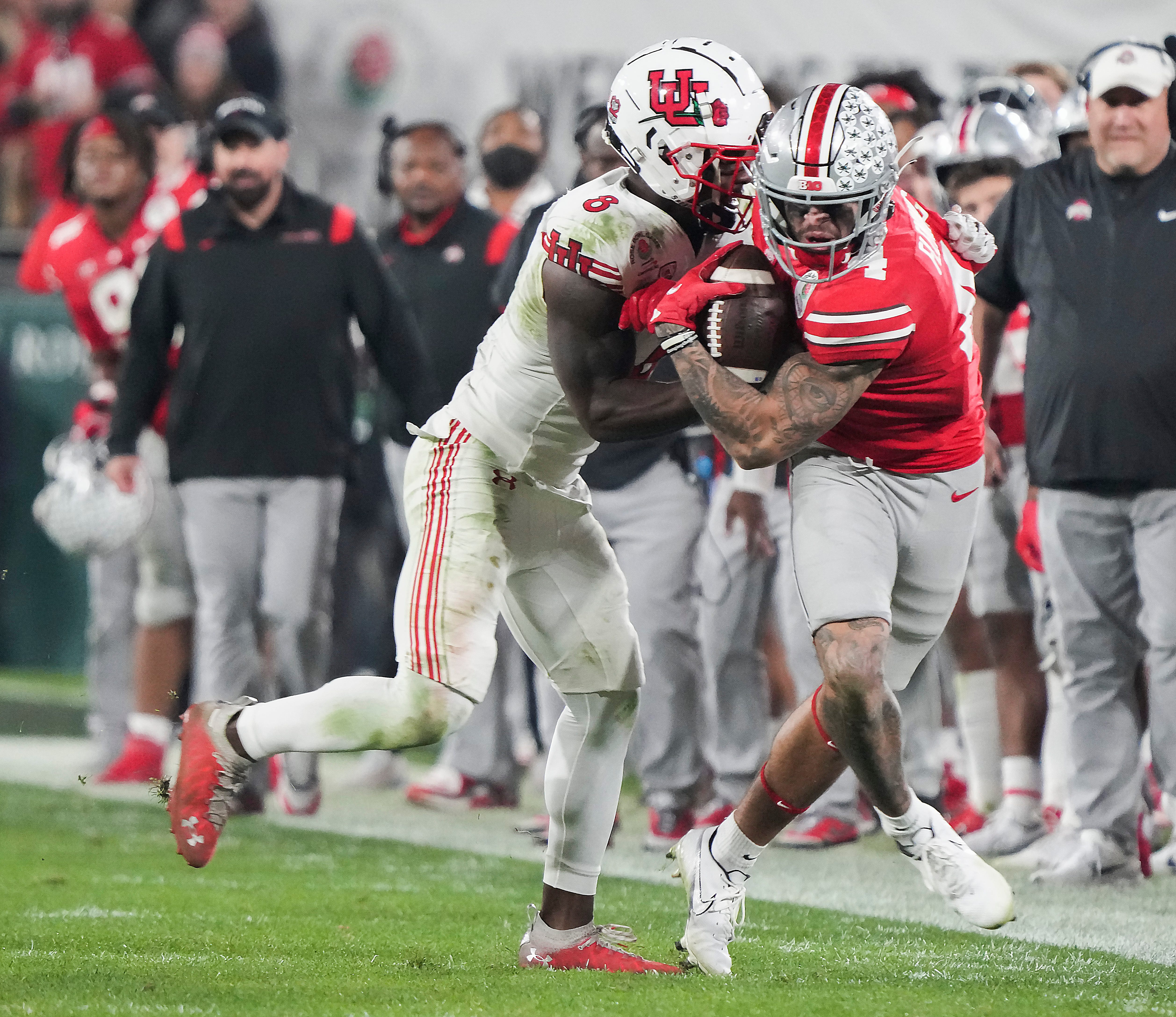 Sat., Jan. 1, 2022; Pasadena, California, USA; Ohio State Buckeyes wide receiver Julian Fleming (4) fights for yards as Utah Utes cornerback Clark Phillips III (8) defends during the fourth quarter of the 108th Rose Bowl Game between the Ohio State Buckeyes and the Utah Utes at the Rose Bowl. Credit: USA TODAY Sports
I was expecting Julian Fleming to be in the rotation on a consistent basis last season, but the young man has been dealt a difficult hand when it comes to injuries. He has waited patiently and appears ready to reach that five-star potential. 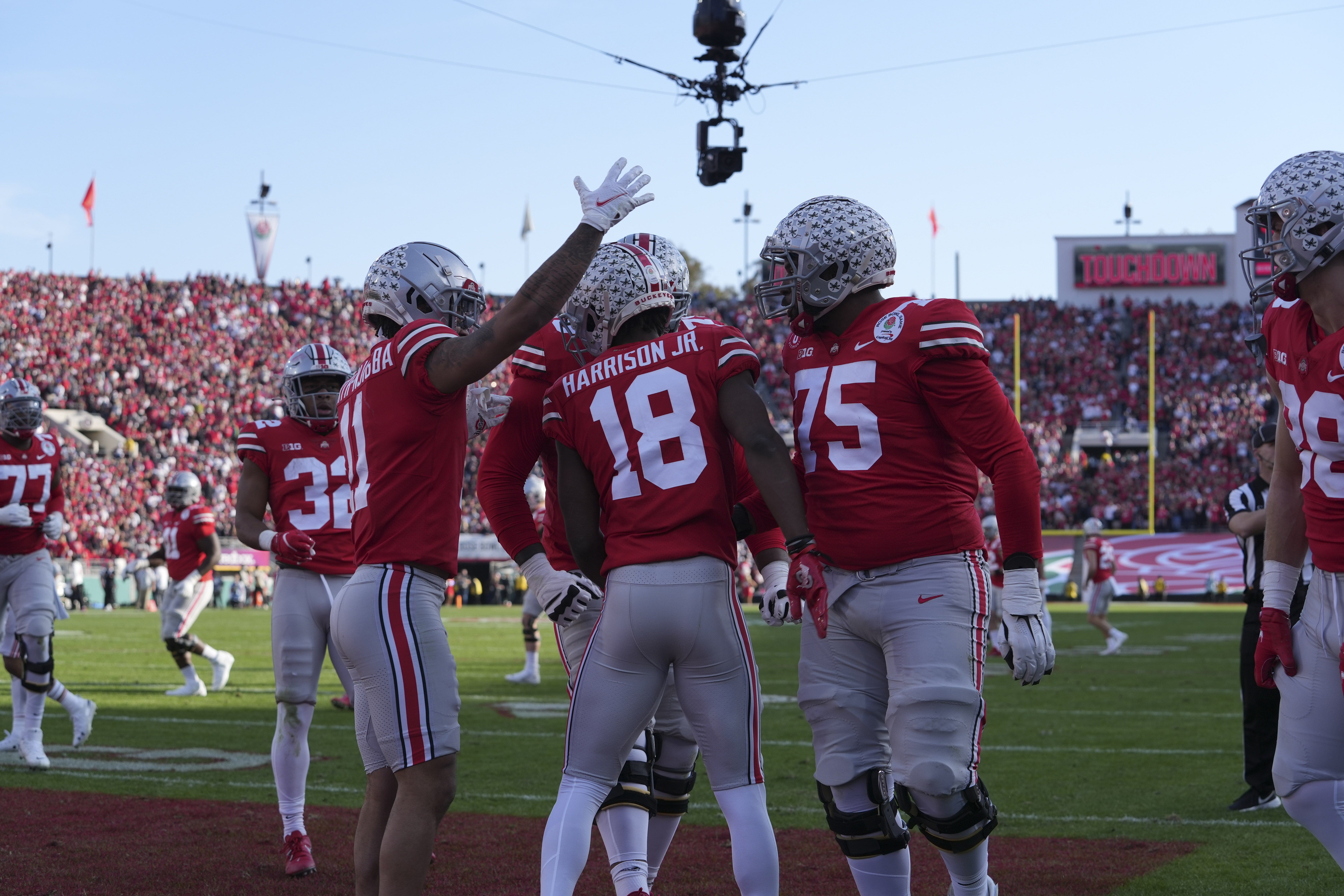 Sat., Jan. 1, 2022; Pasadena, California, USA; Teammates celebrate with Ohio State Buckeyes wide receiver Marvin Harrison Jr. (18) after he scored a touchdown during the second quarter of the 108th Rose Bowl Game between the Ohio State Buckeyes and the Utah Utes at the Rose Bowl.
Rose Bowl Game Ohio State Buckeyes Against Utah Utes. Credit: USA TODAY Sports Network
Marvin Harrison Jr. is another highly touted recruit from the 2021 class, and although he was not ranked as highly as Egbuka, the son of an NFL Hall of Famer had more than his fair share of offers. Most thought Harrison would have gotten a few more shots in the rotation, but in such a loaded room, the true-freshman was forced to wait his turn. 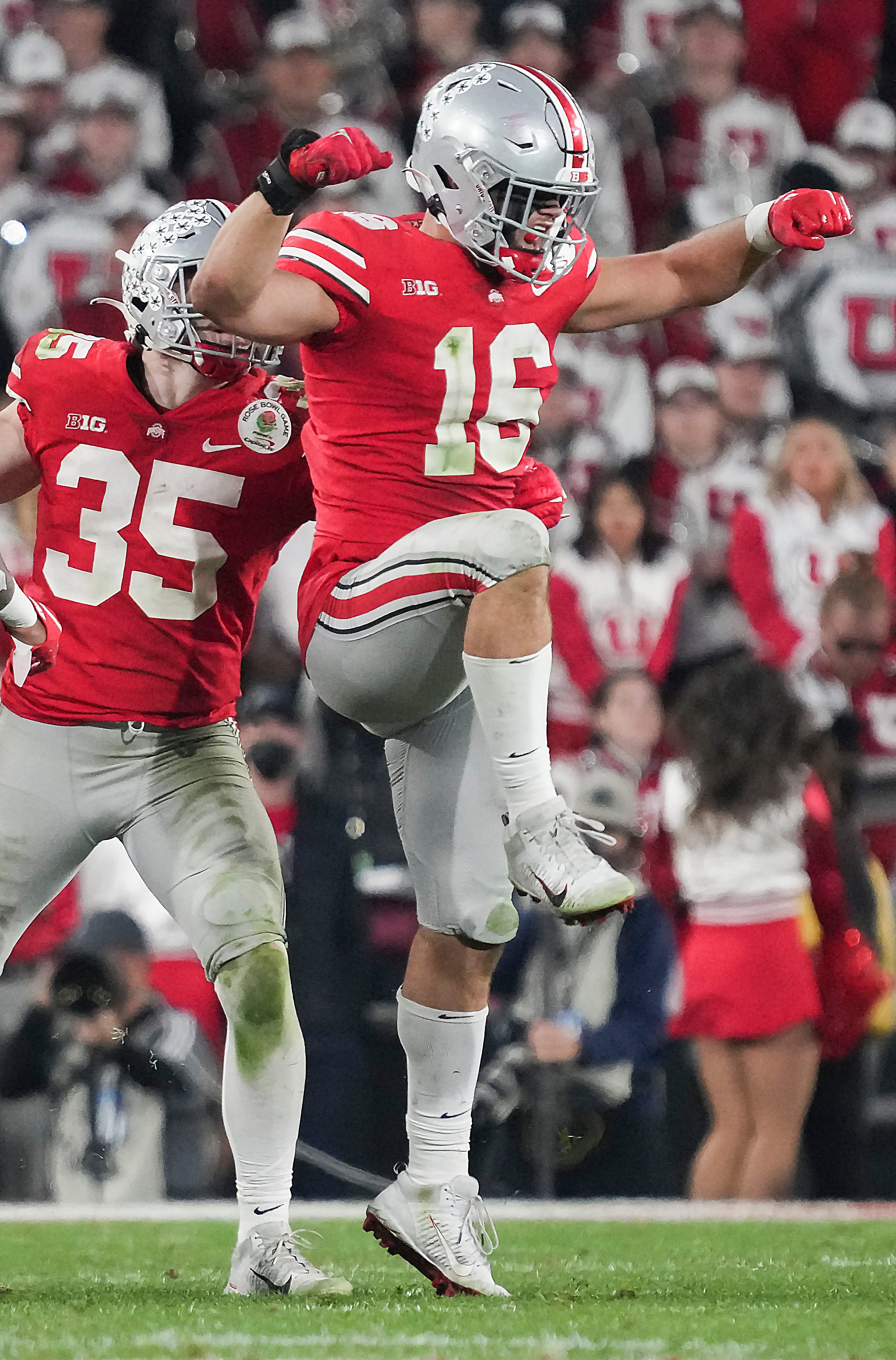 Sat., Jan. 1, 2022; Pasadena, California, USA; Ohio State Buckeyes linebacker Cade Stover (16) celebrates after a stop during the fourth quarter of the 108th Rose Bowl Game between the Ohio State Buckeyes and the Utah Utes at the Rose Bowl. Credit: USA TODAY Sports Network
Cade Stover’s career has been a wild and unconventional ride. He was ranked as a top ten linebacker coming out of high school in the class of 2019 before moving to tight end. We then saw him move back to linebacker and play very well in the Rose Bowl. Stover is going to play a significant amount of time at linebacker and he should, but he is a great athlete with great size at 6-foot, 4-inches, and 255-pounds. With Jeremy Ruckert leaving and Stover proving he can do it all, I don’t think it’s crazy to see a Chris Gamble two-way situation. 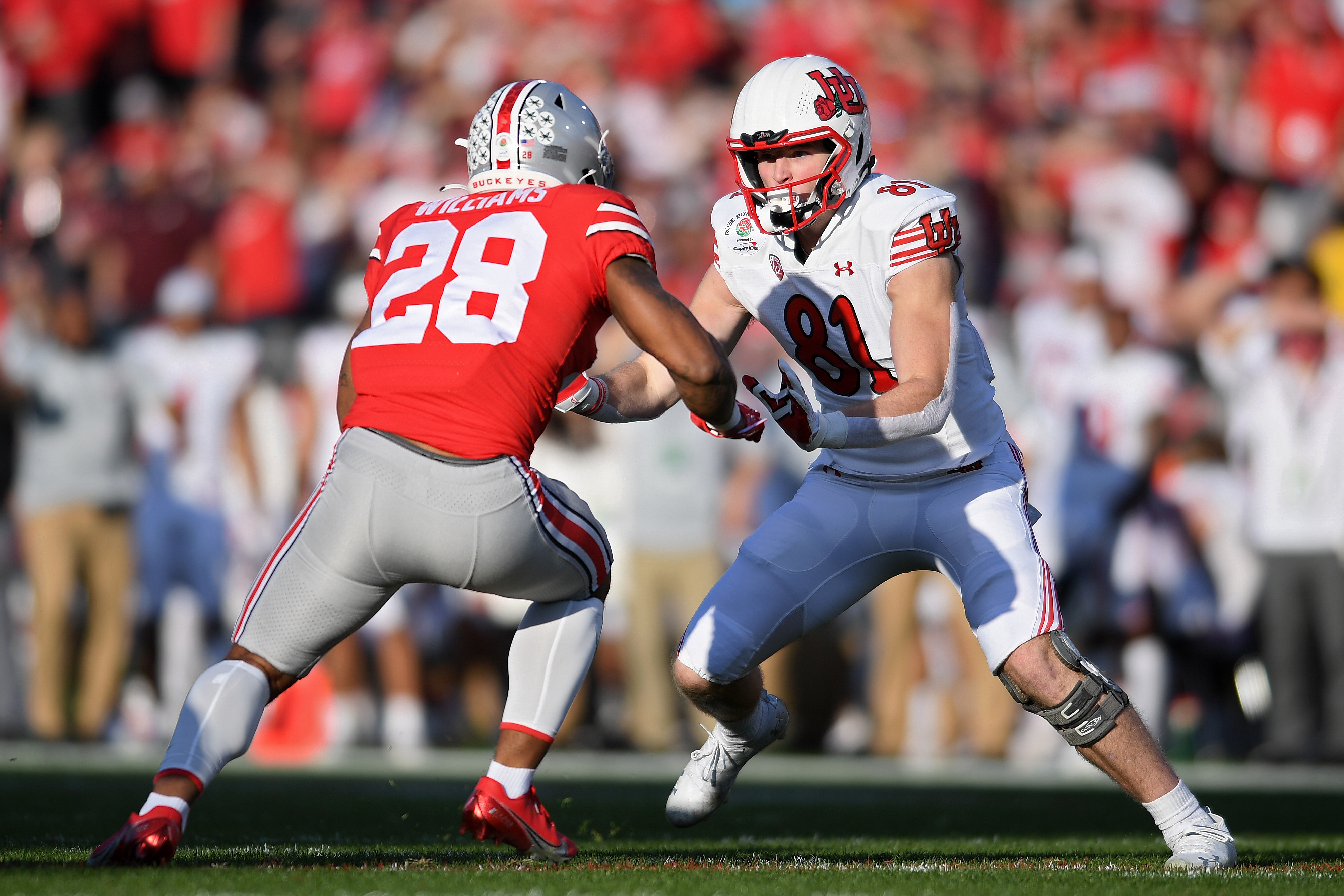 Jan 1, 2022; Pasadena, California, USA; Ohio State Buckeyes running back Miyan Williams (28) blocks Utah Utes wide receiver Connor O’Toole (81) during a kickoff in the first half during the 2022 Rose Bowl game at the Rose Bowl. Mandatory Credit: Orlando Ramirez-USA TODAY Sports
Miyan Williams runs like a bowling ball and has proved that he is capable of being an elite every-down back in the Big Ten, but obviously, TreVeyon Henderson is RB1. Despite Henderson being the man, it would not shock me if the snaps next season are more evenly split between the two than what we saw last season in an effort to preserve Henderson.
Contact/Follow us @BuckeyesWire on Twitter, and like our page on Facebook to follow ongoing coverage of Ohio State news, notes, and opinion. Follow Phil Harrison on Twitter.
Let us know your thoughts, comment on this story below. Join the conversation today.

This site is not endorsed by, sponsored by, or affiliated with Ohio State University.
Powered by WordPress VIP