It’s been an interesting year for Barcelona fans, with the club looking lost at times as it struggles to find its way in a new era without star man Lionel Messi.
It was almost impossible to imagine the Catalan giants without Messi, and yet last summer Barcelona got their comeuppance for terrible financial mismanagement when they found themselves unable to re-register possibly the greatest player of all time.
In a cruel twist of irony that Alanis Morissette could probably write a song about, Messi had decided to stay after threatening to leave the summer previous but the club were no longer able to keep him.

So it was off to Paris, and since then Barcelona have never quite seemed the same.
Yet it would be re-writing history to say that all of the club’s problems began when Messi left.
Things were not in a good way prior to his departure. The aforementioned financial issues, an ageing and overpaid squad, along with a lack of world-class quality meant the club were adrift in La Liga and embarrassments in the Champions League.
Yet thanks to Football Manager, we can transport ourselves to an alternative universe. With a few clicks of a button, we can imagine a world where Messi never left Barcelona.
So, according to Football Manager, what would Barcelona’s 2021-22 season have looked like if Messi never left?
Would it be filled with trophies, sunshine, and rainbows?
Well… not quite.

Firstly to Messi’s individual performance, which was as impressive as ever.
He hasn’t set the world alight with PSG in Ligue 1, but he continued his incredible form for Barcelona in our simulated season.
The Argentine notched the highest average rating in the league, topping the list with a 7.72 rating, scoring 15 league goals, and assisting 11 times.
Yet that actually pales in comparison to his previous season; in 2020-21 he scored 30 and assisted 15 while the year before that he produced 25 of each.
Regardless, he did enough on FM22 to be named and named La Liga’s Player of the Year.
In the Champions League, he managed three goals and three assists, a figure he has almost already surpassed in real life with PSG this season where he has scored five times and produced his best performances for the Parisiens.
It was another solid season from the seven-time Ballon d’Or winner, who ended the season aged 34.
Lionel Messi's stats at Barcelona are out of this world 👽🐐 pic.twitter.com/obioN4gVvl
— TM (@TotalLeoMessi) August 7, 2021

So how would Barcelona get on if Messi had never left? Would all have been ok?
Not exactly.
In January, Barcelona found themselves in fifth and adrift from the top four, not unlike where they found themselves in real life.
Xavi’s job seemed under serious threat, but a second-half-of-the-season push saw them finish comfortably third with Messi playing a starring role.
Xavi generally set his side out in a 4-2-3-1, with Messi playing on the right-wing and Aguero, who in this universe thankfully didn’t have to retire, starting alongside his close friend as the striker.
In real life, Barcelona found themselves dumped out of the Champions League at the group stages but, with Messi in the side, the Blaugrana had no such problems in our simulation.
They got out of their group and knocked out Lille 6-1 on aggregate in the round of 16.
Yet the quarter-finals would prove their undoing, with Barca throwing away a 2-1 lead from the first leg to lose 4-2 on aggregate to Manchester United – who went on to lose the 2022 final to Real Madrid.
In fact, painfully for Barcelona fans, Madrid had a fantastic season, winning La Liga as well as the Champions League.
Madrid wouldn’t win the Copa del Rey… but no, Barca wouldn’t either.
They had a much better run than they had in real life but lost the semi-final to Carlo Ancelotti’s men, who then lost to city rivals Atletico Madrid in the final.
There would be some silverware for Messi and Barcelona however, the Catalans triumphing over Atletico in the final of the Supercopa.
Would a second additional season of Messi bring Barcelona some success? We decided to simulate one more campaign to find out.
Over the course of the summer in 2022 Barcelona made no signings whatsoever, hampered by their financial issues.
Messi, whose contract was running down, began asking to leave but Barcelona refused to sell him (summer 2020, anyone?).
It was a good thing Messi didn’t go anywhere; he fired Barcelona to the 2022-23 La Liga title, his 18 goals and 10 assists bringing the league back to Catalonia for the first time since 2019.
A fourth-round exit in the Copa del Rey to Real Betis and a round-of-16 loss to Chelsea in the Champions League meant that would be the club’s only major honour, but considering the previous season’s failure, a league victory was some success.
Yet that would be Messi’s last act as a Barcelona player. Two years after he left for PSG in real life, he left Barcelona in our simulation in June 2023 upon the expiry of his contract.
Would he retire, ending his career as a one-club man?
Oh no. For one last hurrah (and payday) he signed for… Newcastle.
A city in the North East that loves football? It’s basically the same as Barcelona. 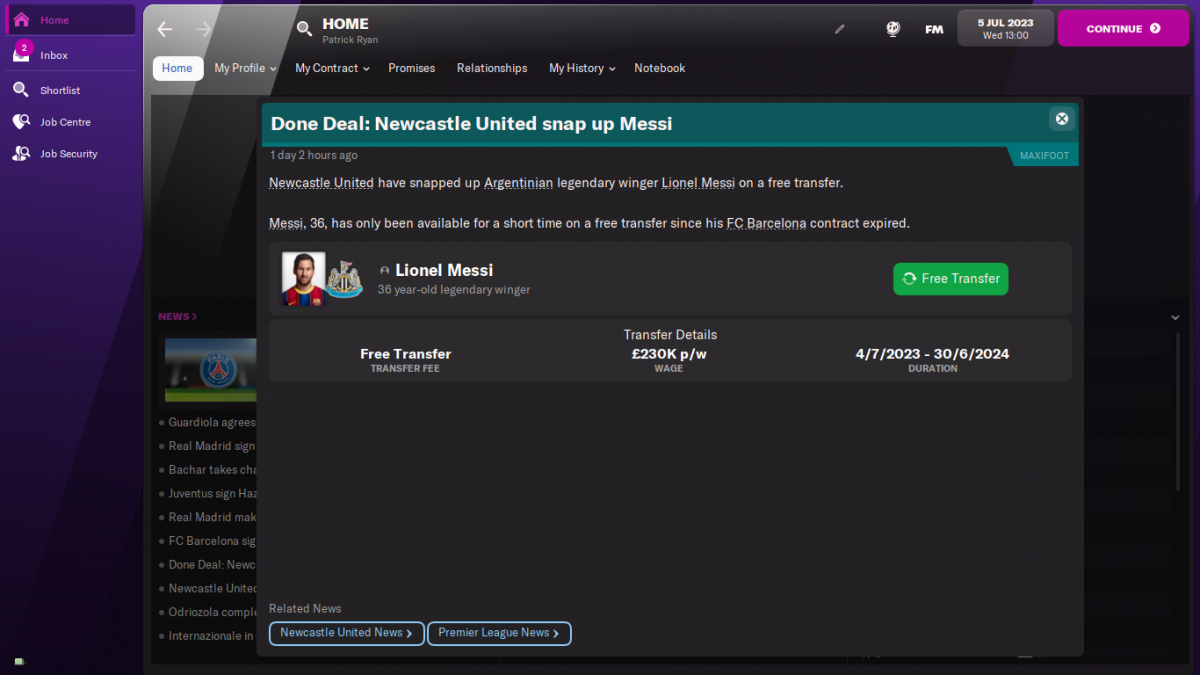 By Patrick Ryan
8 crazy stats from Adama Traore’s sensational return to Barcelona
Can you name every club to knock Barcelona out of the CL since 2000?
Comparing Ronaldo’s last season at Real Madrid with Messi’s at Barcelona
Ranking Barcelona’s eight signings from Arsenal: Henry, Hleb, Cesc…

Sep 27, 2022
Manage Cookie Consent
To provide the best experiences, we use technologies like cookies to store and/or access device information. Consenting to these technologies will allow us to process data such as browsing behavior or unique IDs on this site. Not consenting or withdrawing consent, may adversely affect certain features and functions.
Manage options Manage services Manage vendors Read more about these purposes
View preferences
{title} {title} {title}